It is main menu from here

To menu here common throughout the site

It is the text from Kitahiroshima City ball park special site here.

We introduce contents of symposium

It was the Mayor of Kitahiroshima, and Masami Ueno which was ball park promotion resolution society's chairperson spoke thought after construction decision or the current approach situation and said hello to venues which became full. 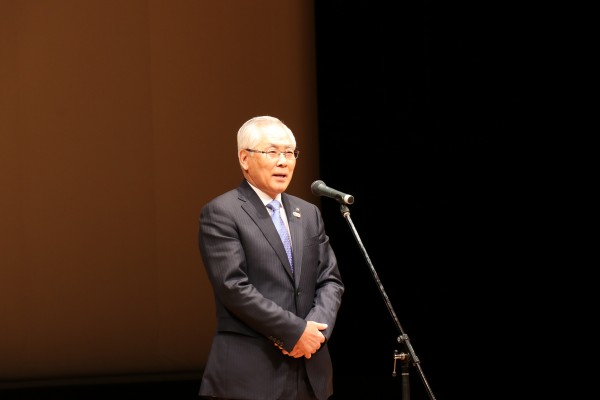 We had you give a lecture how you made use of value that Hokkaido held for environmental change to surround the future in addition to introduction of summary of new baseball stadium and a variety of watching games environment from Director Mitani of Hokkaido ball park under the theme of "the future when ball park aimed". 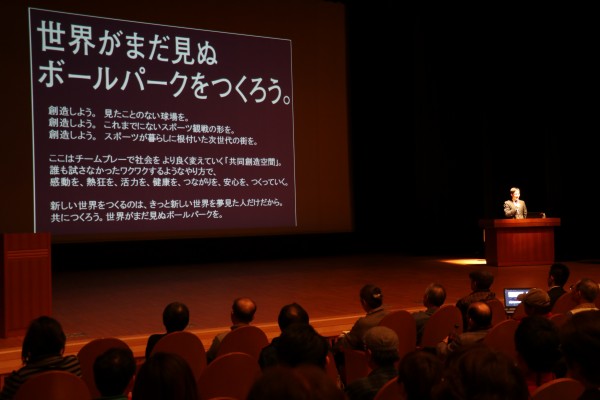 We had focus give a lecture when it was said with role that you should take as baseball team of professional baseball all the time whether you worked on the cause of what kind of action program, many activities under the theme of "about strategic CSR activity of fighters" from Maezawa, general manager of Hokkaido Nippon-Ham Fighters business supervision headquarters. 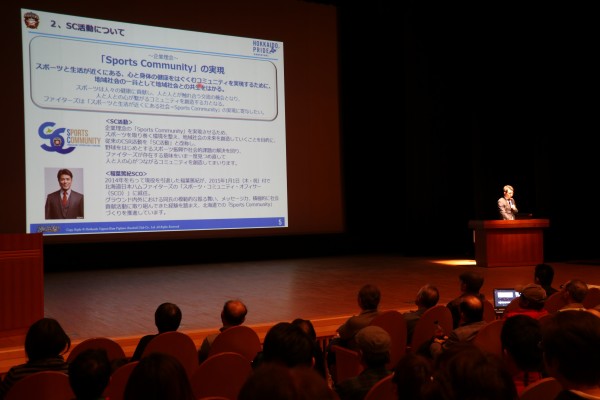 We brought about effect that was new by crossing both resources regardless of ball park invitation under the theme of "about cooperation of Kitahiroshima City and fighters" from the general manager of Kawamura plan finance manager and ball park promotion at city and told about contents of process and cooperation business that concluded partner agreement by common thought that making of city might be pushed forward together based on that. 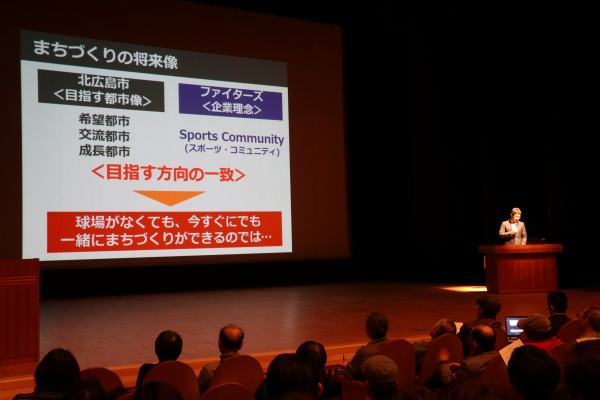 We were introduced to state of camping in Arizona and Okinawa of Hokkaido Nippon-Ham Fighters or state of new baseball stadium of Diamondbacks under construction now by Saito treetop him of HBC radio personality which had you act as the whole host progression of this symposium. 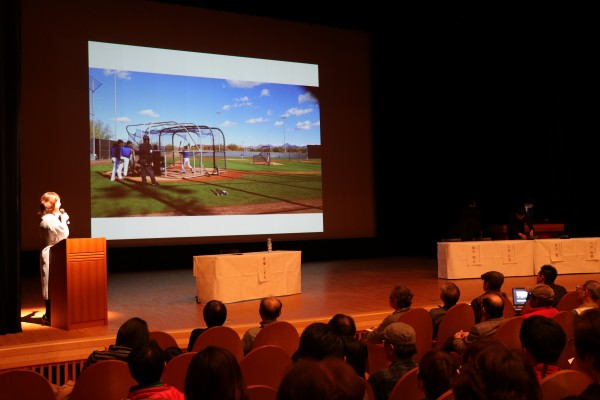 We added to Director Mitani of Hokkaido ball park which had you give a lecture, Maezawa, general manager of baseball team, Kawamura plan finance manager of city, and Professor Suzuki of Hokkai Gakuen University which had way of thinking and thought for making of city of city tell from overall progress and a wide variety of points of view at symposium in last year went on the platform and had you give presentation how there should be for increase of residential population and number of visitors/exchange population by ball park construction and maintenance of station in preceding paragraph as town and performed the cause of progress of Mr. Saito treetop, panel discussion by four people of going on the platform, and traffic infrastructure and visit means, JR which were necessary maintenance gave thought and ways of thinking from each position based on questionnaire in Hokkaido about the need of station setting newly. 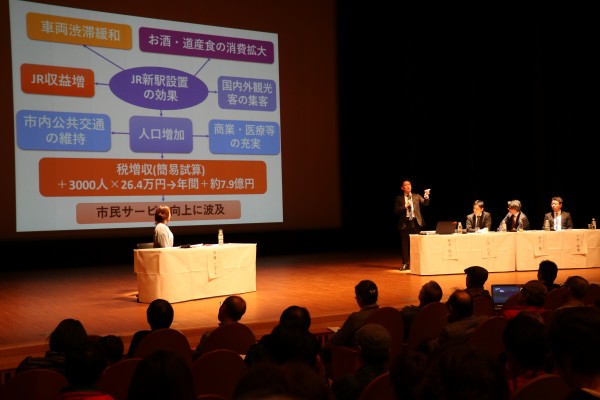 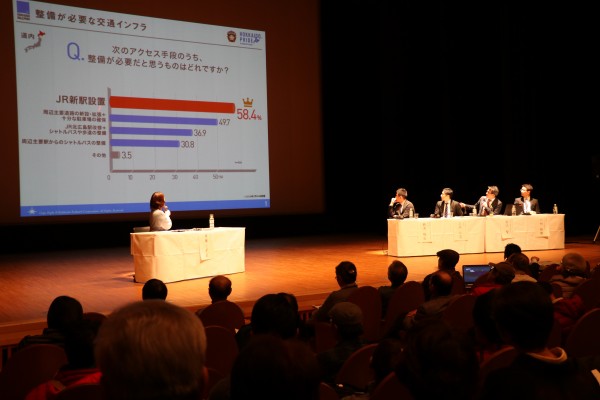 Finally we had you talk about thought and thought for the opening of business of 2023 from each person of going on the platform and performed summary of symposium. On symposium holding, thank you very much all of you who had you cooperate. 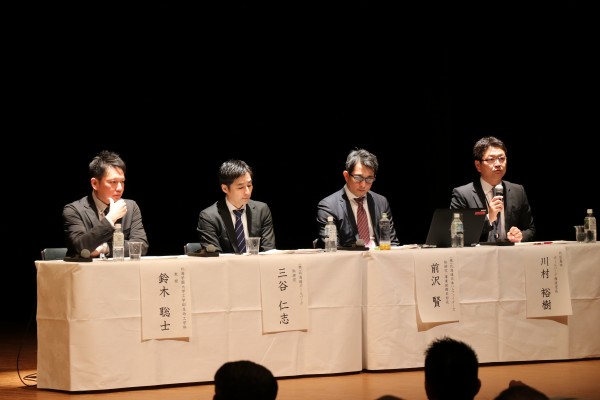 We introduce approach of fighters and Kitahiroshima City and hold symposium thinking about what kind of making of city you will promote with ball park in future. 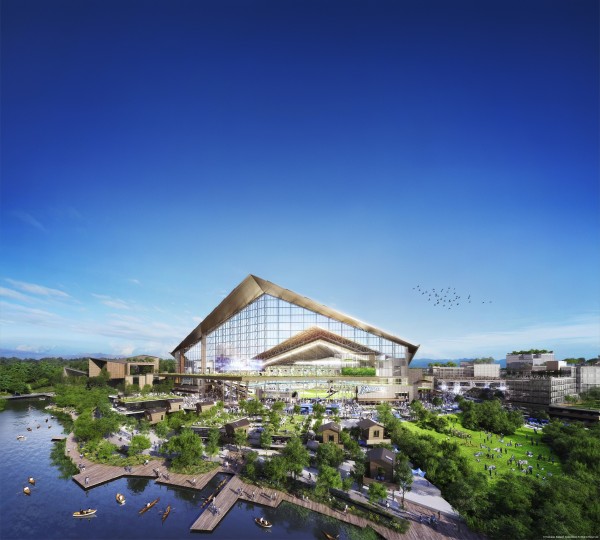 It is targeted for participation

Application (we accepted and were finished)

As you send entrance postcard about person who had you apply, on the day please arrive after bringing.